Dublin IT, Letterfrack and Bray colleges, UCD and Queen’s

The flexibility of wood was demonstrated by students throughout Ireland at the 2015 Third Level Student Wood Awards organised by the Wood Marketing Federation (WMF). Presented by Minister of State Tom Hayes last night in the National Botanic Gardens, Dublin, wood was researched for large-scale multi-storey buildings down to fashion accessories such as bow ties.

Minister Hayes acknowledged the wide range of projects after he toured the exhibition prior to the presentations. “It is fitting that the work of students is recognised by the forest industry because of its quality and because it represents an investment in the future of the sector,” he told the attendance at the awards ceremony.

Gerard Murphy, representing the main sponsor – Coillte – praised the students for producing innovative work that shows off timber in its wide range of applications. The Managing Director, of Coillte Forest, who chaired the WMF at the inaugural awards told the audience: “When we set out on this journey in 2005 and organised the first awards the following year, we knew that wood needed to be promoted in our colleges especially among designers, architects and engineers,” he said. “I am delighted that the project has grown from strength to strength as the colleges and students have responded positively.”

UCD student Liam Farrelly, winner of the architecture award, explored the use of timber in construction as a more sustainable alternative to concrete and steel while Graham Watson, winner of the engineering award, also looked to timber as a building material. The Queen’s University Belfast student completed a research project to create “a lightweight, low cost timber floor cassette that could compete structurally with precast concrete floor units”.

Once again Letterfrack College students were in the running for a number of awards. Sean Burns, winner of the innovation category, dispelled any preconceptions that wood might be too rigid for flexible applications when he designed a process that would produce curved forms.. This he achieved by utilising modern technology such as advanced CAD software “to unfold curved and organic 3D computer models” as he put it “so that wood can be used in a variety of bowed and rounded applications in design”.

His fellow student Paul Sweeney received special merit award for his project ‘WoodBows’. This is a collection of wooden bow ties designed and manufactured in Co. Galway. They are sourced from a range of hardwoods – home grown and imported – complemented by textile design details. His company WoodBows incorporate the use of the newest CNC technologies to cut out the ties to the highest standards and specifications.

However, Paul just missed out on the design award to Stuart Hayes who produced an occasional table created from a variety of timber offcuts – home gown and exotic. Entitled  ‘Incognito’ the table is functional but also works as a design object – style and substance. It has hidden and movable panels that present a ‘Rubik’s Cube’ type puzzle to the viewer.

The awards featured a new craft/fabrication category this year. It was won by Barry Flanagan, Bray Institute of Further Education for his project ‘Scaffold Furniture’. Barry demonstrated that there is no waste in wood. He completed his furniture design project from waste scaffolding boards which otherwise would have been burned or end up in a landfill site.

“The objective of the awards is to encourage students to explore functional, aesthetic and design aspects of wood and wood products,” said Paul Harvey, Chairman WMF.  “The awards are judged by Duncan Stewart, director Earth Horizon  (chairman), Simon O’Driscoll, O’Driscoll Furniture and Des O’Toole, business development manager Coillte,” he said.  “These are top professionals in the fields of architecture, engineering and design and provide excellent feedback to all students whose work made it to the adjudication process.”

Minister Hayes praised the Wood Marketing Federation for persisting with the student wood awards and other projects such as Wood Awards Ireland. “This year marks the 10th awards and I am delighted that my own Department through COFORD continues to support this worthwhile project,” he said. I also acknowledge the support of Coillte, the main sponsors, and the Society of Irish Foresters”

Duncan Stewart praised the innovative work of the students but called for greater support from their colleges. “I ask colleges to make timber mainstream in courses because of its renewable, sustainable and functional benefits,” he said. “ Too many colleges treat timber as a marginal medium instead of placing it at the heart of architecture, engineering and design courses.” 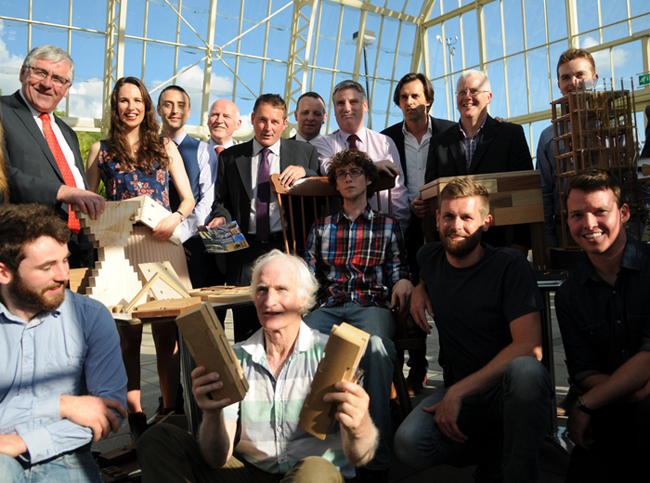 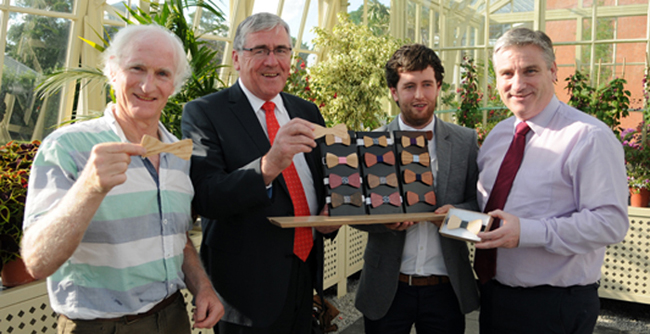 Minister Hayes (second from left) presented the prizes at the annual Third Level Student Wood Awards in the National Botanic Gardens, with (from left): Liam Farrelly, UCD winner of Architecture Category, Gerard Murphy, who represented Coillte, the main sponsors of the awards and Duncan Stewart, chair of the awards’ jury.