IN NATIONAL BOTANIC GARDENS BY MINISTER OF STATE

Irish students continue to explore new exciting uses for wood including construction and design as demonstrated once again at the annual Third Level Student Wood Awards. Students continue to push  the boundaries and this year was no exception as wood was explored in a range of uses including high rise construction, interior design, musical instruments and even as a material for hard tops in sports cars.

Tom Hayes, Minister of State Hayes with responsibility for forestry who presented the awards said: “These awards have gone from strength to strength and I am confident that participating students will have worthwhile careers in their chosen fields specialising in wood construction and design.” 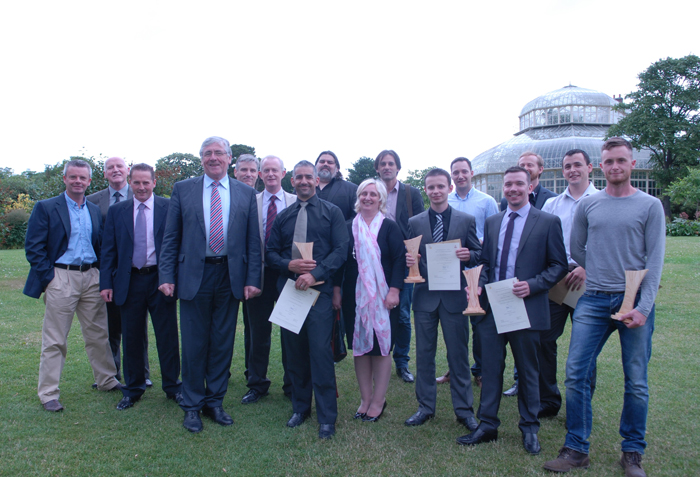 An innovation award, won by Ross Boyce, Dublin Institute of Technology (DIT), was added as a new category this year.  “The awards are a key aspect of the Wood Marketing Federation programme as many students are now using home grown wood in their projects,” said Paul Harvey, chairman of the Wood Marketing Federation who organised the awards in association with Wood-NI.  “In this regard we are delighted Ross Boyce won the innovation section as he has carried out research into designing a simplified timber construction system using oriented strandboard, which is manufactured by Coillte Panel Products (CPP).” 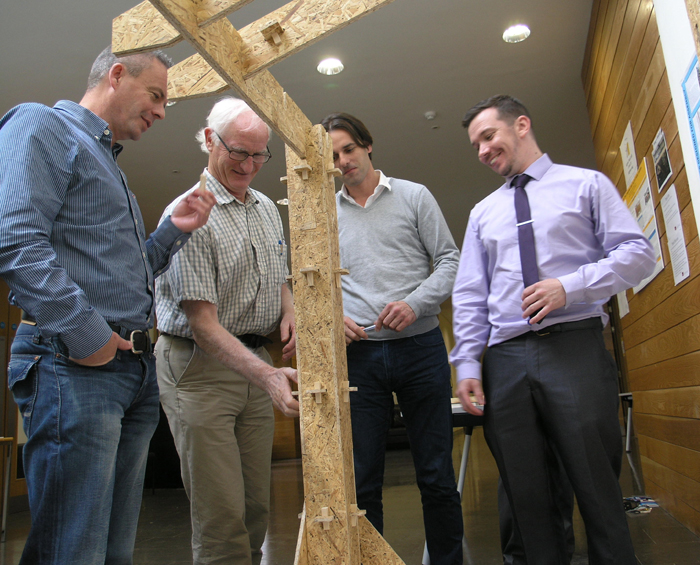 Duncan Stewart a judge of the Student Wood Awards tests the innovative structure by Ross Boyce (extreme right) with fellow judges Des O’Toole, Coillte and Simon O’Driscoll, Simon O’Driscoll Furniture during adjudication of the awards. Ross was the outright winner of the innovation category.

Paul Glavin of the Cork Institute of Technology (CIT) won the architecture award for his project  ‘Timber Construction in Medium Rise Buildings’. “Medium rise buildings are almost exclusively constructed from either steel or concrete in Ireland but engineered timber combined with innovative engineering solutions is a realistic alternative,” he said. The Cork student demonstrated how an eight-storey circular timber office could be built using engineered timber combined with steel tension cables. 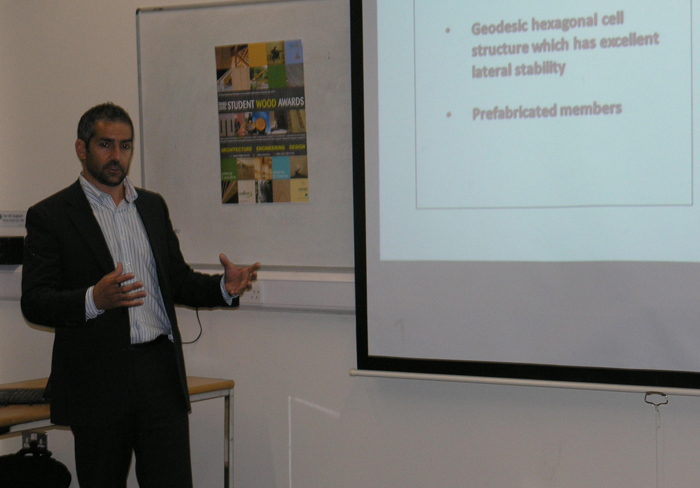 Paul Glavin, Cork Institute of Technology winner of the architecture award makes his presentation to the judges in UCD.

The engineering award went to Kieran McGrath also CIT, who experimented with Irish timber in truss connection design using Eurocode (5.1) – an EU design standard for wood. ”The purposes of this research was to gain an understanding of how timber connections made from Irish grown softwood would behave under fire conditions,” he said. 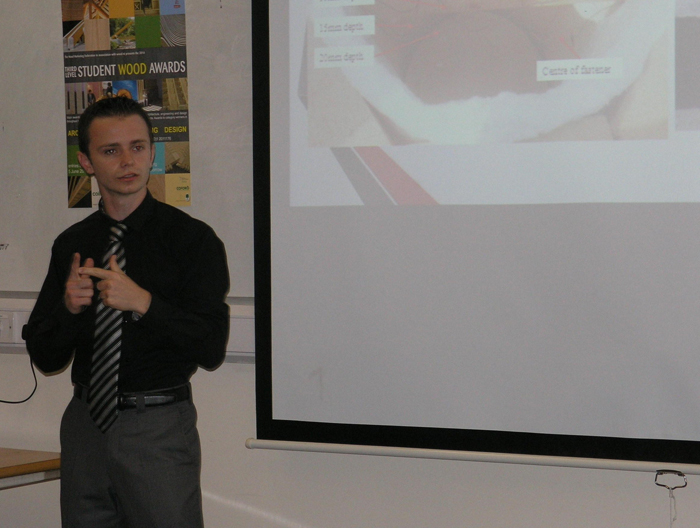 Tom Sweeney Galway-Mayo Institute of Technology (GMIT), Letterfrack won first prize in the design category for his project ‘Weave’ a highly innovative flexible cladding system in engineered wood. This can be modified and profiled into a wide range of shapes with potential for exhibitions and temporary partitions.

Ronan Cannon also of GMIT received a special award for exploring new areas where Tricoya could be used. Tricoya is a strong long-life engineered wood product manufactured by CPP in Clonmel from small timber and wood residue. He explored Tricoya applications in worktops and even a hardtop for a sports car. 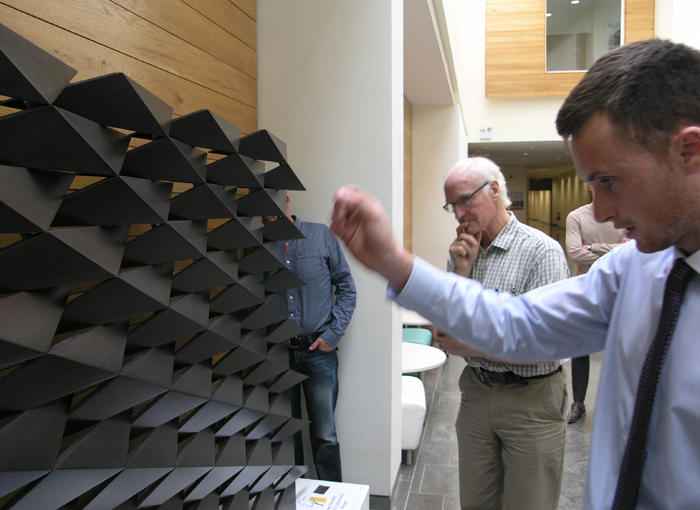 Tom Sweeney Galway-Mayo Institute of Technology (GMIT), Letterfrack winner of the design category explains his project ‘Weave’ to the judges.

Daniel Sweeney, CIT used species such as maple and walnut sourced in Kenmare in the manufacture of a bass guitar. He received a special design award for his reinterpretation of the iconic 4 String Fender Precision Bass guitar.

Erika Morocz, DIT received an award for her project ‘LUNO’ where she bent and shaped wood into a wide range of profiles and contours without using moulds. The sections were cut partly by machines and by hand to achieve “pre-planned curvature and connections with potential for furniture and other uses”. 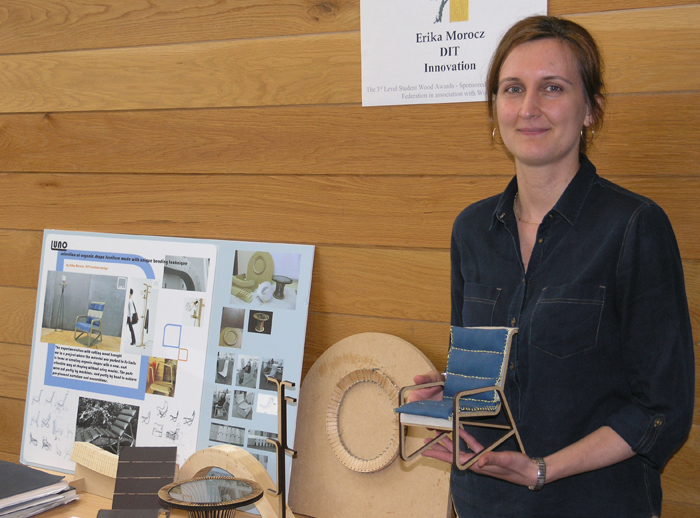 Erika Morocz, DIT received an award for her project ‘LUNO’ where she bent and shaped wood into a wide range of profiles and contours without using moulds.

Paul Harvey thanked Coillte – the main sponsor – and COFORD in the Department of Agriculture, Food and the Marine and the Society of Irish Foresters for their continued support. 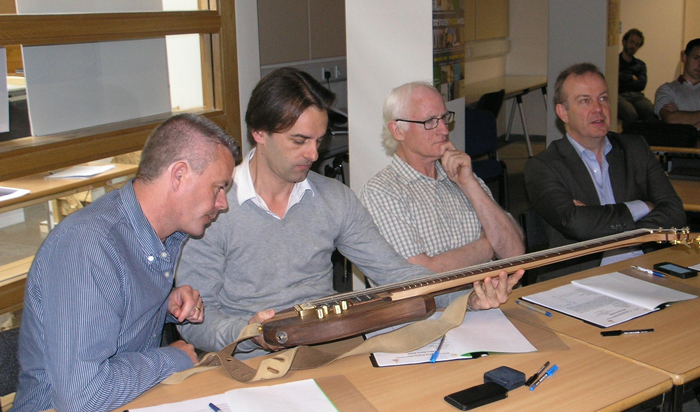 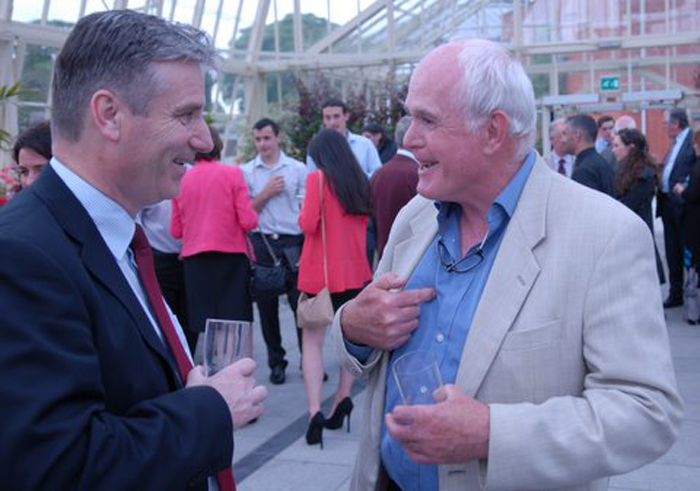 FORESTRY AS A CLIMATE CHANGE SOLUTION