Wood is the most versatile, renewable and sustainable resource on the planet. Timber is the oldest construction material, first used in the primeval forest as rough shelters. Sophisticated wood construction dates to timber frame buildings in China 10,000 years ago. Wood used in building for structural and non-structural applications has a significantly lower carbon footprint than materials that use fossil fuels during manufacture.

Our global forests capture 2.3 billion tonnes of carbon annually from the atmosphere according to the UN Intergovernmental Panel on Climate Change (2000). Timber from sustainably managed forests, converted into construction timber, furniture and other wood products act as carbon stores, often for centuries. In Scandinavia, timber houses and churches still survive from the 13th century. Wood is enjoying a major revival in Ireland after centuries of exploitation.

The Wood Marketing Federation was set up in 1989 to increase the knowledge and understanding of wood and wood products and to promote its use in construction and design.

The Federation forms partnerships with a wide range of companies and organisations – State and private – who share our mission: To promote wood as a renewable, sustainable and versatile natural material Please visit the other areas of our site to see the work, publications and promotional initiatives in which the WMF are involved. 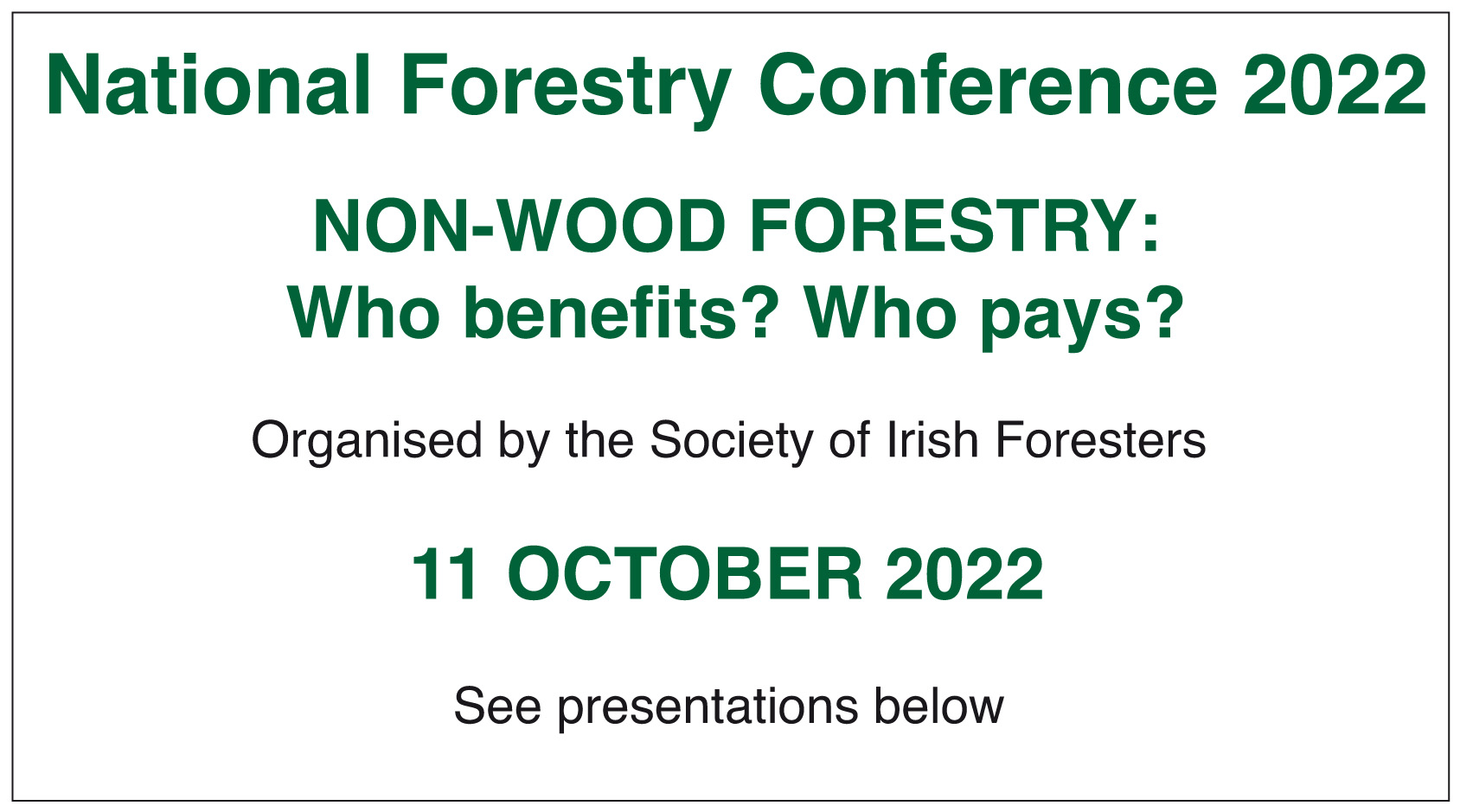 ◊ Eamonn Kenny, Coillte – Strategic Vision for our Forests with a specific focus   on Health and Well-Being Benefits of Forestry

◊ Prof. Cathal O’Donoghue – The Economics of Afforestation and Management in Ireland – Future Prospects and Plans 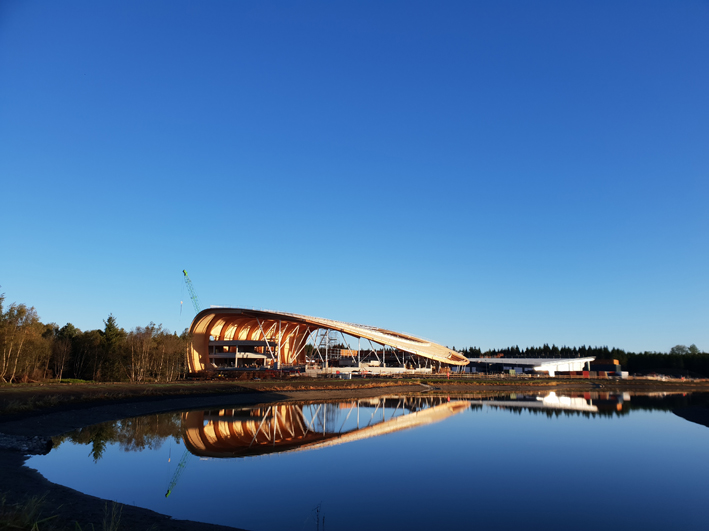 We thank Pippa Hackett, Minister of State with responsibility for forestry

PROTECTING OUR TREES AND FORESTS

The importance of safeguarding Ireland’s forests from pest, diseases and other damage

4 Brian Murphy As the sawmiller sees it

5 Mechteld Schuller As the grower sees it

The conference brochure is available for download from our publications section.

Scottish presence brightens up climate change conference as Minister Gougeon outlines how Scotland has made forestry a priority and “has invested in developing and growing the sector”.

Mairi Gougeon, Scotland’s Minister for Rural Affairs and Natural Environment  told delegates at the national forestry conference that “there is a growing understanding that forestry and forests are in the front line of our national response to the climate change emergency that faces us all”. She said: “There is great dynamism in forestry in Scotland at the moment. This is because the Scottish Government has made it a priority and has invested in developing and growing the sector.”

In contrast with Ireland, Scotland has 18.5% forest cover and aims to have 21% of the land under forest and woodland by 2032, while the conference was told that Ireland’s target of 18% forest cover won’t be achieved until well into the next century based on current planting levels.

Minister of State Andrew Doyle opened the conference, organised by the Wood Marketing Federation and the Society of Irish Foresters. The conference explored the central role of forests in climate change mitigation. However, the theme was broadened by speakers including Stuart Goodall, CEO of the UK Confederation of Forest Industries (Confor).

To illustrate this holistic approach, Stuart Goodall presented a case study of a mature forest in South Scotland and examined the carbon benefits along the wood chain; from planting to product. “The carbon stored in the forest is one third of the story,” he said. “More than half as much again is stored in the wood products made from it, but the biggest carbon saving of all is in substitution, because timber is used instead of non-renewable masonry, steel, or fossil fuels.”

In a wide-ranging talk on production forestry and climate change, Marina Conway CEO, Western Forestry  Co-op stressed the need to plant “the right species in the right places”  and quoting Sir David Attenborough, she said that in many instances the right trees were those planted in commercial plantation forests.

She examined the role of forestry from a global and local perspective. “Halting the loss and degradation of forest ecosystems and promoting their restoration can contribute over one-third of the total climate change mitigation required by 2030 to meet the objectives of the Paris Agreement,” she said. She demonstrated how this can be achieved at a national and local level.

Harvested wood products abate close to one billion tonnes of CO2 but Ireland can improve this further she told delegates. “Even relatively small operations such as McCauley Wood Fuel in Mohill, Co. Leitrim which take in 400 tonnes of timber weekly displace 150,000 litres of heating oil every week. This enterprise is not near full capacity so the benefits for the local economy are enormous as the McCauleys and similar enterprises expand.”

However, in common with other speakers, she said the full potential of forestry will not be realised unless we achieve viable afforestation programmes. This will require a different approach and “may required greater financial incentives” and measures she said, such as:

She is a strong advocate of broadleaf planting but acknowledges the major role coniferous production forests will play in decarbonising the economy. High production plantation forests complement rather than threaten natural woodlands, she explained. In most instances they provide the only viable source of wood for construction. Quoting Trevor Fenning and Jonathan Gershenzon she said: “Those who oppose plantation forests, need to be clear what the choices really are, rather than what they might like them to be.”

Forester, architect and engineer explain the ‘substitution impact’ of wood when used instead of non-renewable masonry, steel, or fossil fuel at the forestry conference

While the recent national conference “Forestry as a climate change solution” explored the role of forests in carbon sequestration, what happens wood after it leaves the forest proved to be just as  important in the debate on climate change mitigation. Outlining the Forest Industries Ireland (FII) perspective, Marina Conway, CEO, Western Forestry Co-operative illustrated this point when discussing wood in decarbonising the economy, in construction and agriculture. “Every tonne of timber used instead of cement results in an avoided emission of two tonnes of CO2,” she told delegates.

Mike Haslam, director with Haslam & Co. Architects outlined how his practice’s ethos is design-based on  the  circular economy “or  a cradle to cradle approach where waste equals resource”. He said: “A fundamental part of this is an interest in low embodied energy building and our interest in designing buildings as carbon sinks. At its most basic this acknowledges that one  tonne of CO2 locked in per cubic metre of timber  is locked in for the  life-time of the product.”

He illustrated this with a number of case studies featuring  buildings his practice has designed. “Our exploits in timber moved onto post and beam construction at the Airfield Estate in Dundrum using glulam supplied by Cederlan in Cork,” he explained. “Glulam is of interest not only as a carbon sink but also because  its strength to weight ratio is better than steel and its embodied energy is five times less than the steel equivalent.”

“For wood products to make a difference in carbon sequestration, enabling fast-growing wood species from temperate regions to substitute for hardwoods is important,” he said. This has relevance for Ireland as a producer of commercial conifers. He cited panel  board reconstituted timber products such as long-lasting reconstituted Accoya board used  for external cladding and made from conifers, which has the strength and durability of tropical hardwoods.

Des O’Toole, President, IrBEA and Coillte focused on the ‘substitution impact’ of wood. “The ‘substitution impact’  describes how much greenhouse gas emissions would be avoided if wood is used instead of  other fossil based products to provide the same function,” he explained. “For example, a tonne of cement emits nearly a tonne of carbon in its making while a tonne of timber, will – through the trees from which it was made –  remove up to two  tonnes of carbon from the atmosphere.”

An engineer by profession, O’Toole believes that the benefits of increasing general wood use through substitution’ is not understood, capitalised on, or even promoted adequately enough by the sector. “It should be more widely recognised as one of the key drivers in our battle against global warming as we now face a declared climate emergency,” he maintained. He said these benefits are often overlooked or not accounted for in the carbon balance equation. “The forest  industry needs to highlight them more effectively with our policymakers and with the general public,” he said.  “It is therefore imperative, as the drive to reduce CO2 in construction increases, that we encourage the industry and policy makers to start building with carbon, rather than emitting it.”

He placed emphasis on the  major contribution of engineered wood in future construction  but solid wood in timber frame housing – now the main structure in  north America and Europe – can also make a major contribution to decarbonising the construction industry in the short-term.  “It is estimated the average three-bedroom timber-framed house, stores roughly 19 tonnes of CO2, meaning that if Ireland produced all of its 15,700 new homes last year using timber-frame,  a total of  just under 300,000 tonnes of CO2, would be locked away every year,” the IrBEA President maintained. “At a steady rate of  35,000 new homes per annum – as some analysts suggest we need – this equates to 665,000 tonnes of sequestered carbon. To put all of this in perspective, the carbon embodied in this number of homes, is equivalent to the emissions produced by approximately 370,000 modern cars over a year.”

In addition to construction, he maintained bioenergy had been underestimated in displacing fossil fuel.”The bioenergy sector is a key part of the overall forestry ecosystem,” he said. “As well as contributing to towards Ireland’s ambitious renewable energy targets, the expected growth in demand for biomass will be a key outlet for the increased supply of fibre projected over the next 15 years. The development of local biomass supply hubs will play a role in driving this mobilisation by matching local supply with local demand and providing the best route to market for small wood in first and second forest thinnings.”

PLEASE SEE PRESENTATIONS AND BOOKLET BELOW